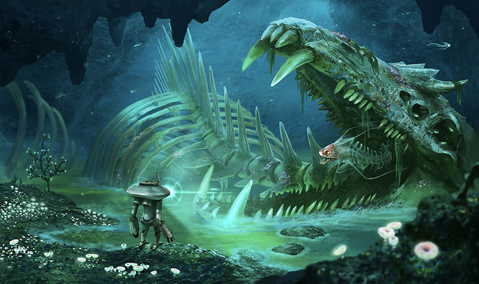 It’s a space farer's worst nightmare. You’re working and traveling on a spaceship when it is mysteriously forced to make an emergency crash landing on a nearby ocean world. You open the hatch on your escape pod only to discover that you are stuck in what appears to be an endless sea. You’ve got to escape this world, but first, you need to survive. Sound familiar? It’s a scenario you’re familiar with if, like me, you’ve played Subnautica.

Subnautica was released in 2018 by developer Unknown Worlds and since then has accrued a large following of dedicated players, including myself. I’m a sucker for a good survival game. Give it some interesting sci-fi elements and an alien mystery to solve, and I’m happy as a clam. Subnautica’s watery environment was impossibly fun to explore, and its sandbox gameplay mechanics kept me busy creating complex survival habitats until my fingers were wrinkly.
Subnautica has carved out a niche for itself in the genre, with locked geography and a cryptic storyline that most other survival games lack. It can be difficult to find games like it outside and inside of the genre. That said, I’ve compiled a list of titles having one or more of the elements which made Subnautica such a fun experience. If you’re ready to dive into a new game, take a deep breath, and let’s go.

Trailer: ARK: Survival Evolved Announcement Trailer
Complex crafting systems; resource collecting; survival mechanics like starvation, dehydration, and temperature regulation. What more could you ask for in a survival game? How about dinosaurs?

Ark, like Subnautica, is a genre-defining game and considered by many to be one of the most complex survival games on the market. With a variety of differing environments on the map to explore, you’ll spend plenty of time creating massive fortresses, taming dinosaurs, and preparing with your fellow players to take on the four bosses scattered throughout the expansive island.

Ark’s story is a little more difficult to discover than Subnautica’s, and figuring it out could be considered a game unto itself. With enough exploration and tenacity, you can uncover the mystery of why you are there and what happened beforehand by collecting a series of letters as well as completing the boss battles.

One thing that I felt that Subnautica lacked was a multiplayer option. With Ark, you have a variety of multiplayer options to choose from: countless open servers to play with strangers and friends alike, creating your own server to have private matches with your closest fellow survivors, and even a local multiplayer option!
Get it here: https://store.steampowered.com/app/346110/ARK_Survival_Evolved/

Game Trailer: No Man's Sky Next Trailer
For a lot of gamers, the mention of No Man’s Sky brings with it the inevitable slight cringe from its initial release date in 2016. It's the perfect example of a game overpromising, and subsequently being rushed to completion.

It’s also the perfect example of game developers buckling down and doing what they do best: creating an immersive experience that fulfills the vision they set out for in the beginning. Despite No Man’s Sky somewhat disastrous debut, the developers have created an homage to their dedication, a staple survival game in the science fiction space exploration genre. In 2020, Hello Games is still diligently working on improving the game, and it now has even more features than what was promised before the release.

With eye-catching graphics reminiscent of 70’s and 80’s science fiction novels, and a near limitless opportunity to explore one of the countless, computer-generated planets, No Man’s Sky will keep you busy for as long as you have the time to give it. And, like Subnautica, there’s a story to be uncovered with more than thirty hours of scripted storylines. Take to the stars and uncover the secrets of the universe. Maybe you’ll even find planet 4546B while you’re at it. Just stay clear of the Quarantine Enforcement Platform!

Our next game will take you back to the ocean with Windbound, a recent release from both Deep Silver and 5 Lives Studios. This time, though, you won’t be diving beneath the waves, but sailing on top of them as you build the ultimate seafaring vessel to explore the variety of islands available to you.
This third-person survival game follows the main character lost at sea after a mysterious storm. The graphics create the feeling of being within a watercolor painting. But don’t be deceived by its artistic appearance; Windbound has all the makings of a great survival game. You’ll need to monitor your health, hunger, and stamina, all the while gathering resources to craft a vessel that will keep you safe from coral reefs, rocks, and sharks.

The storyline is outlined to the player in a mural, which feels right at home with its beautiful aesthetic. Whether you’re battling beasts, crafting additions to your boat, or just enjoying the scenery, this game will keep you entertained. Catch the wind in Windbound, (it’s more difficult than it looks!) and set sail into a breathtaking game in the survival genre.

Don’t Starve and its multiplayer sequel Don’t Starve: Together is a fan favorite when it comes to survival games. With its unsettling Tim Burton-like animation style, this game will have on the edge of your seat, or maybe ready to hide under the blanket.

You’ll start off playing as the intrepid Wilson, and this game pulls no punches. Directly following the loading screen, you’ll find yourself off in the middle of an unforgiving forest, with no weapons, nor instructions. This game won’t hold your hand. Don’t Starve, which was released by Klei Entertainment in April of 2013, has a distinctive, 2D artwork set in a 3D environment. Each new game brings with it a randomly generated world for you to survive. Be careful of the surreal monsters that wander the woods once the sun sets and use those daylight hours to prepare for the impending night. Note that this game has permadeath, so if you die, you’ll have to start all over again.

The story within this game isn’t complex, and therefore not prevalent in the game. That said, despite being a sandbox game, you’ll be able to unlock a short campaign mode after a certain amount of exploration. If anything, the story comes from the novel gameplay mechanics, including a sanity gauge, which, when depleted will bring your worst nightmares to fruition. Test your survival skills with Don’t Starve, and if you don’t want to go at it alone, try the sequel, Don’t Starve: Together.

Like Windbound, the game Raft will set you adrift in the middle of the ocean. You, or more ideally you and a friend, will struggle to survive an uncaring ocean and a strangely committed shark as you cobble together a floating fortress from wayward debris. Developed by Redbeet Interactive, and published by Axolot Games, Raft is the perfect example of a survival game with a twist.

By being confined to a boat, you’ll have to get creative when it comes to building up the perfect base. Save for the occasional island, your entire world will be limited to what you can scrape together from salvaged material. Create a complex, multilevel base from the tiny, four by four square you start on.

Note that this game is still in early access, so expect some bugs. But the developers have come a long way from their initial testing and have recently added two chapters of story into the gameplay. Grab and friend and take to the seas in Raft.

Is it cheating to include Subnautica: Below Zero in this list? Maybe! But I think I’d be remiss if I didn’t dedicate one of my picks to the newest game from Unknown Worlds. No one does the things that we all loved about Subnautica better than the developers themselves. Submerge yourself back into the watery world of planet 4546B with its successor, Subnautica: Below Zero. This time, you might want to bring a jacket, because you’ll be exploring a much frostier environment, with a variety of new creatures and biomes to discover.

The sequel is set one year after the events of the first game. You’ll be playing as a different protagonist named Robin, who is on a mission to rescue her sister. Unknown Worlds has hired a new writer for this installment of the game, revealed to be Jill Murray in a post by the project lead nearly a year ago. The narrative is different than it was in Subnautica, but you can be assured that it is equally enjoyable and still contains the same feeling that made the first game so engaging. It would be hard not to, considering the scaffolding that Subnautica: Below Zero is built from.

Conclusion
Hopefully, this list gave you a little inspiration as to what you might play next. So, before you dive back into Subnautica for a second playthrough, give one of these games a try. Are there any we missed? Let us know in the comments!