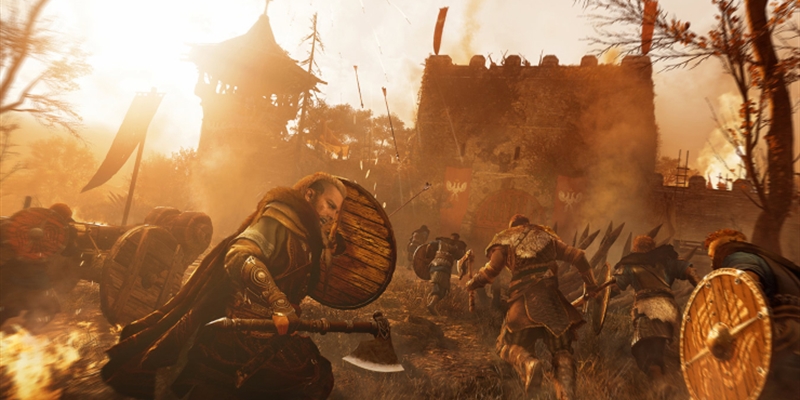 This review comes from an individual author on the team.

After dropping a few dozen hours in Ubisoft’s latest addition to the popular long-running series, I feel qualified to give you a good look at Assassin’s Creed Valhalla, and provide some initial thoughts. If you want the TL;DR, here it is: I’m really enjoying the game, and for fans of the franchise, it’s a big thumbs up if you have even a passing interesting the new title.

I’ve played every major title in the Assassin’s Creed franchise, so you can consider me somewhat of a fan. Some of my favorites include II, IV: Black Flag, and Odyssey (I’m a sucker for Greek mythology and history). I’m also a fan of Vikings, so when I heard the next title after my escapades in Greece would have a Viking setting, I was already interested.

Starting out in Norway and quickly moving to the hills and forests of England, I can say that Valhalla continues to build on major changes the previous two titles introduced to the series. Combat is meatier than ever, with some gory finishers (which you can turn off if that’s not for you), a bountiful skill tree to customize your approach to offing your opponents, and the return of the hidden blade in its full glory.

The protagonist, Eivor wears his hidden blade…well, not hidden. Strapping it to the outside of his wrist, players missing the franchise-defining weapon will be pleased to know that for the most part, it reintroduces those one-hit kills missing from previous games, even if it is clearly visible. Social stealth also makes a return, and players can manually cloak or de-cloak as they wish, offering a greater variety of stealth options, particularly when skulking around urban environments.

The story has continued to keep me interested long after I reached English shores, and considering the set-up for the story introduced back in Norway, I’m eager to see how Eivor’s tale plays out, for better or worse.
Speaking of characters, I’ve really enjoyed not only Eivor’s personality, but also those of the characters you interact with as you go through the game’s stories and missions. Valhalla leans even further into the recent RPG additions added in Odyssey, giving you the choice to play out situations and decide character’s fates via conversation options.

I like this new approach Ubisoft are taking to the franchise, and while the games have certainly expanded in scope (Valhalla was initially promised to be a smaller, more focused affair than Odyssey, which is no longer the case), Ubisoft have tailored their approach to discovery and mission design in these vast open worlds, so players’ experiences always feel organic and authentic.

You spend less time chasing map markers, and more time neck-deep in the game, just in awe of environments, and encountering new areas and locations naturally. Overall, it’s a great step forward from Odyssey, and firm footing for whatever Ubisoft decide to do next.

One of the reasons I love the Assassin’s Creed franchise so much is the attention the developers give to each of the worlds; in Black Flag, I get to live as a pirate of the Caribbean, while in Odyssey, I’m a Spartan warrior, kicking people off ledges. Valhalla, like its predecessors, revels in making me feel like I’m really a Viking, and living in 9th Century England. It’s why I’ll continue to enjoy this game and others in the franchise for years more to come.

If you’re on the fence about Valhalla, I’d say dive in. With a beautiful world to explore, combat that’s more satisfying than ever, and a story that’s continuing to hold my attention dozens of hours in, you’ll find plenty to appreciate exploring the hills, mountains, and vistas of Norway and England.