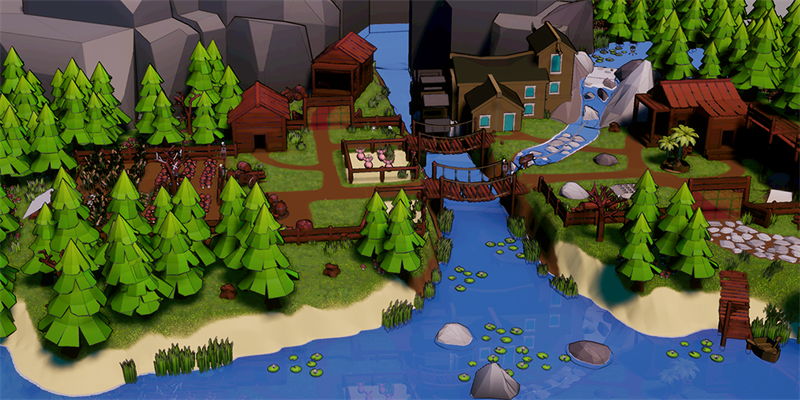 Shooting games are perhaps one of the largest and most diverse categories of video games out there.

From first person RPGs to battle arenas, shooters are a versatile genre that appeals to a wide range of gamers. And soon, shooter fans can look forward to a new indie title to add to their list. Scientific Shutdown, by Welsh Indie developers Define Logic, is a quirky twin-stick arena shooter slated to come out this year.

Twin-stick shooters are defined by their use of two joysticks, one to control movement, and the other to control firing. Scientific Shutdown is no different. The top-down perspective gives players a wide view of the setting, as well as the waves of “rock monsters” gunning to take down the player. These monsters come in a variety of types. Examples include Normal grunts, Tanks, and Exploders, which as you can probably guess, explode within a certain range of the player. These differing enemies provide fast paced and exciting gameplay. Players must defend themselves from the onslaught of enemies by running, dodging, and most importantly, shooting using on-hand weapons. Once defeated, some enemies drop rewards from a selection of different weapons and temporary power-ups.

Gamers will take on the role of one of the recently kidnapped test-subjects for a mad scientist by the name of Dr. Hans Trottelstein. Dr. Hans Trottelstein is a former world-renowned super villain fallen on hard times. Trottelstein's new claim to fame is a horde of rock monsters that he plans to take over the world with, but before that he needs to run tests to see how effective they are as the minions of a super villain making a come-back. Unfortunately for the main character, their job is to evaluate the efficiency of Trottelstein's creations in one of his virtual laboratory hologram chambers. To do this, players must survive wave after wave of rock monster attacks. Each simulated environment is based around a seasonal theme and contains traps and setting-related hazards for players to avoid. And because these environments are Trottelstein’s simulations, traps can randomly appear and switch with assets in the levels.

Scientific Shutdown features a low-poly art style with a cartoony designs and primarily flat colors. The colors are bold, and match well with humorous tone and the themes of the game. Everything seems to have a 1990's 'Windows 95' era aesthetic, which can not only be seen in the character and setting design, but also in the HUD and menus. The virtual simulations that the player has access to are situated on a square from which the environments jut up from. From massive snow-capped peaks to apartment buildings boarding the beach, each level feels intentional and meticulously crafted. The whole experience is supplemented with music reminiscent of an eight-bit video game, as well as the comical taunting of Dr. Trottelstein himself.

Before releasing the full game, the developers at Define Logic plan on releasing an exclusive demo for the Legion Community. There are three levels confirmed for the demo: Port Peril which is themed after a Mediterranean Port; Mad Mountain, which is themed after a ski and camping site atop a snowy peak; and finally, Forest Frenzy, which is a lakeside farm situated in the woods. All three levels are littered with traps that damage both players and rock monsters alike, and – as mentioned previously – due to instability in Trottelstein’s simulations, these traps are swapped at random with assets and traps from different levels. Each level has its own themed hazard, which activates throughout the round and provides additional challenge. These hazards include a Tidal Wave that sweeps the shallows in Port Peril, ice lakes that will break randomly resulting in a cold demise in the Mad Mountain level, and a water wheel that launches down the river to destroy bridges in Forest Frenzy.

We aren’t the only ones excited for Scientific Shutdown. The game was one of eight to be chosen in representing Welsh games development talent at EGX 2019 in London. EGX is a trade fair for video games organized by Gamer Network. The game has even been funded in part by the Welsh Government. Define Logic is made up of three developers and three artists. According to the developers, Scientific Shutdown started as a final project at their university, and since has snowballed into a full-fledged experience.