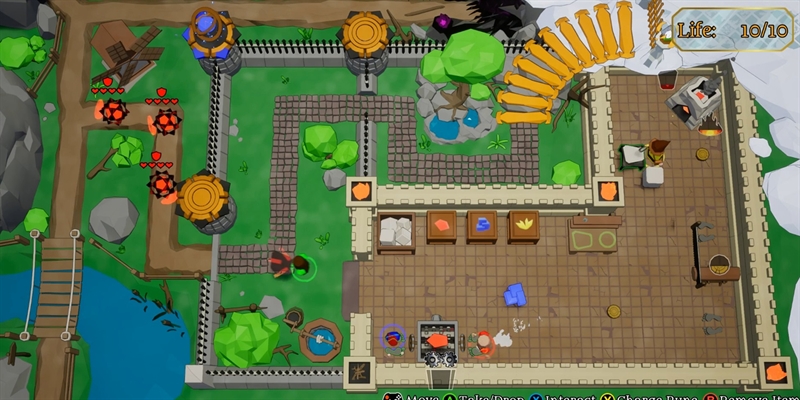 Good couch co-op games are difficult to come by these days, with many developers instead opting for online focused multiplayer. But based on the popularity of such local multiplayers as Overcooked, gamers are craving a good local multiplayer to enjoy with their family and friends. Enter Forge Squad by developers Wizard Dudes, a small up-and-coming indie studio out of Australia. What started as a student project for Wizard Dudes has snowballed into a noteworthy multiplayer that should be on your Steam wish list.

The world of Forge Squad is one which has become a battleground of the gods. A once peaceful relationship existed between the deities until one, the evil Tal’Gan, went rogue. Ultimately defeated and exiled to the empty realm of the underworld. Out of revenge and spite, Tal’Gan formed an ever-growing army of darkness to be sent to destroy the “gates of heaven”. To defend the gates, the gods of this world created humanity – that's where you come in – tasked with defeating the dark portals opening in all places around the earth. Using the runic powers that the gods bestowed upon humanity, it is now time for them to fulfill their purpose.

Forge Squad collects all the fun of multitasking, local multiplayer, and frantic gameplay, blending it into the perfect mixture of a satisfying and fast-paced experience. This crafting game is for one to four players, where gamers use raw materials to craft runestones and defend against waves of attacking enemies. These enemies come in various forms, from normal grunts to shielded tanks, and each type demands differing runestones to defend the base.

Gamers take on the role of human blacksmiths tasked by the gods with protecting the celestial realm from the invading forces of darkness sent from the evil Tal’Gan. The world of Forge Squad is one which has become a battleground of the gods. Humanity fights on behalf of the celestial realm, using runes to protect the “gates of heaven.”

Similar to games like Overcooked, gamers work to gather and process ingredients. In order to create a runestone, players need to work together to crush crystals to powder, combine it with processed pieces of stone, and finish it in a furnace fueled by wood. Like many local co-op games, victory requires good time management, communication, and of course a hefty serving of multi-tasking.

Where Forge Squad differs from the Overcooked-like formula is in its unique blending of different genres. On the surface, Forge Squad is a couch co-op task management game. But it also boasts gameplay mechanics from tower defense titles as well as some impressive worldbuilding. Each round starts off with the crafting mechanic, after which strategic depth is added into the equation with the use of long-distance tower turrets and other weapons. Runes serve as the fulcrum to Forge Squad’s game mechanics, as well as player strategy. After forging runes, players must use them in their towers and on the battlefield, creating an interesting dynamic between crafting materials and using them in combat. Environmental pitfalls like water and quicksand provide even more obstacles for players as they work to defend the celestial gates.

Players control the movements of individual blacksmiths from a top-down perspective as they bustle from one end of the workshop to another. A path extending from the enemy gates wraps around the workshop before ending in a gold cobbled staircase up to the player’s gate. Various towers powered by runes are set up along the path. Enemy spirits, called shadows, march from their gate along the path, where they are met with runestone powered turrets and bombs left on the path by players. Shadows wreathed in different colors will spawn in waves from a portal and head directly toward the players’ base. If the ­­­­­­­base’s health is completely depleted by enemies, players lose the round. Some shadows cannot be destroyed by towers directly, and so must be disposed of by leaving different types of runes along the path.

A point system using stars keeps track of your score, with a victory occurring when all enemies have been destroyed. One to three stars are awarded for each round’s win depending on the number of life points lost during a round. At launch, players can look forward to five different levels themed after different environments, as well as three separate difficulty settings. Coupled with an endless mode, the developers over at Wizard Dudes have assured hours of playability, with plans for more to come. Forge Squad thrives on its multiplayer, but rest assured that you will be able to take on the forces of darkness alone if that is your preference.

Every aspect of Forge Squad has been lovingly crafted by the small team of new developers. From an endearing low poly art style to a soundtrack inspired by the chaos of humanity, each piece plays into the frantic gameplay. Forge Squad is slated for a Spring 2021 release date, but you can give it a try it with our exclusive sweepstakes for demo keys at the Lenovo Legion Community.

Are you excited to try Forge Squad? What’s your favorite couch co-op game? Check out our sweepstakes for a chance to win a demo key for Forge Squad, or check out the game’s Steam page here.