Some People are Obsessed with Loop Hero, and I Sort of Get Why 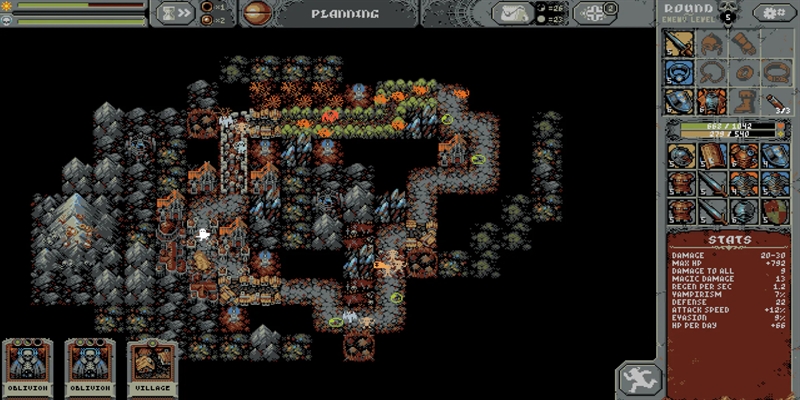 Loop Hero looks like a game straight out of the 80’s and early 90’s, like the first iterations of Final Fantasy and the games that preceded it.

In that regard, it hits a true stroke of nostalgia, but the gameplay is anything but nostalgic.

Combining elements of idle games, rogue-likes, rogue-lites, RPGs, and more, Loop Hero has established itself as something truly unique in gaming. Lacking the ignorance that idle games enable, and adding in elements of city building, RPG equipment collection, and more, it’s in a category all of its own.

Allow me to explain the gameplay loop for those who haven’t yet played it. The world has gone dark, and you – a hero – bring things back into being by remembering stuff and going out to search in the great unknown.

Your little character runs around in a loop, fighting monsters, collecting equipment to power up with, and acquiring both materials and tiles (or cards). The tiles can be anything from streams and mountains to cemeteries and vampire mansions. Some you place in the darkness around the loop to give you buffs (many of which evolve as you progress, or depending on how you place them), while some you add to the loop to add other enemies and game changes.

You can leave the loop at any point, though dying will only let you take 30% of the collected materials with you, leaving away from the camp tile nets you 60%, while retreating while in camp gives you the full amount.

You’ll use these collected materials to build a village and various shops and facilities outside of the core gameplay, each of which offer new gameplays elements, buffs, and more. There are so many layers to this game, it’s a marvel it all works so seamlessly.

Now, I’ll be honest; this game isn’t for me. I need something more active, and the game is in dire need of a fast-forward that’s speedier than 2X (though you can edit this yourself to increase it), but I can certainly see why streamers and gamers like CohhCarnage have enjoyed putting dozens of hours into it. At just $15 or so, it’s a game that will eat up your time and give you a very special experience in return.

If you’re a fan of any of the genres I’ve mentioned, this one’s worth checking out, quite simply because there’s nothing else quite like it out there.

Played it already? Let us know what your thoughts are in the comments below!