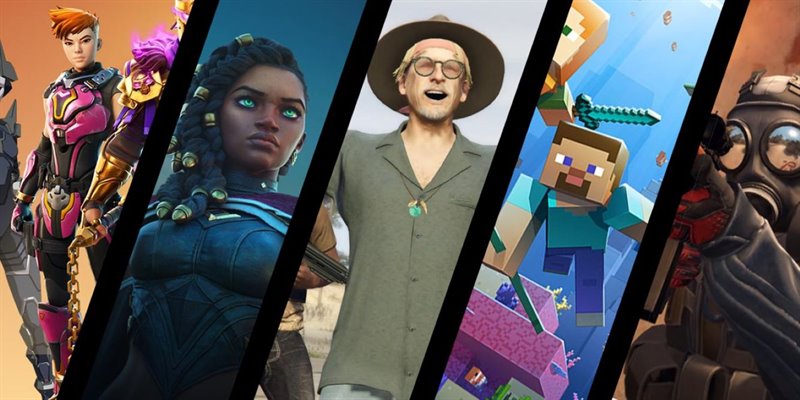 Welcome back to Game Industry Titans!

We’re checking out the top five games of the previous month, to see which of these Titans has climbed to the top. In this series, we break down a number of data points to see where these games stack up against their competitors.
We look at what’s being played, what’s being watched, and who’s getting followed. Using a total of nine data points, we gather information on each game, compile it and then convert it into point values. These are the heavy hitters, the mainstays, the movers and shakers of the gaming world. Enjoy our list of Game Industry Titans!

Down one spot this month is the one and only Minecraft. Switching spots with Fortnite largely due to quite a few less streams for the crafting adventure sandbox in the month of February. Fans continue to play and build, carrying the game into our number 5 slot for last month. Developers at Mojang have also experimented with bringing Minecraft into our homes in new playable forms, including the RPG looter, Minecraft Dungeons, but it seems nothing hits quite like the original. For PC players with the right hardware, Minecraft also got support for Raytraced lighting and reflections. Minecraft continues to be a favorite game to stream and watch.

Players across all platforms are also getting hyped for the Caves and Cliffs update that launches later this year. One new item in that update is a Sculk Sensor block. This block detects vibrations in nearby blocks and can emit a wireless redstone signal. Players will be able to sneak past the sensor block, but if they don’t see it, the Sculk block will emit particles and light when triggered. It can also be used with a piston to make a wireless clock. We’ll see where Minecraft lands on our list as they continue to add new content.

Rising one spot to number 4 for this month, Fortnite continues strong in all of our metrics. One stat stands out, a combined 43 million followers over Facebook, Twitter, and Instagram. Fortnite destroyed its next closest competitor (GTA IV) by nearly 5 million followers. Fortnite also did extremely well by coming in 3rd in our list of 20 titans in the Average Daily Twitch Viewers weighing in with over 160,000.

The steady stream of character skins is one of Fortnite’s greatest features. The game boats an ever-eclectic collection of characters from a wide array of different pop culture universes. The February Crew Pack includes VI, a female member of the Wolf Clan and along with her outfit, players will receive the Foxbow Quiver Back Bling, the Crooked Claw Pickaxe, the Drift Shift Wrap and a loading screen.
Besides the new content and quality of life updates, Fortnite also shares player creations each week, featured in-game and on their website. With Epic’s steady hand and plentiful upgrades, Fortnite continues its domination as a Titan in the game industry.

Our strategy for determining our Game Industry Titans has been slightly adjusted for the month of February. While many PC games are on the Steam platform, there are a few heavy hitters that aren’t such as League of Legends. We have now taken this into consideration and applied adjustments to any games that make our selection list that are not listed in our two Steam categories.

This clearly benefited LoL as it shot up to our number 3 spot. To be fair, it didn’t trail far behind in January’s list as it just missed the top five coming it at number 6 last month. LoL dominated in the streaming category coming in at number 1 with 223,471 Average Daily Twitch Viewers.

League of Legends touts the largest payouts for tournaments making it one of the most lucrative esports titles and will likely keep it around for some time. Announcing and colour commentary for LoL games and tournaments are legendary amongst Esports fans and general video game enthusiasts alike.

Counter Strike: Global Offensive once again comes in 2nd in our list of Game Industry Titans for the month of February 2021. As one may expect, CS:GO mopped up in the two Steam categories, Average Daily Peak players, and Steam Followers. A staggering million plus people play CS:GO every day. Even with our February adjustment to help non steam games applied, CS:GO was able to hang onto the number 2 spot by a strong performance across all of our metrics.

At the end of last year, Valve started Operation Broken Fang, an event that will run until April. For optional Pass holders, the game offers more detailed statistics for review after a match, as well as the ability to vote on the next map. Valve has also added the ability to ping places and weapons, an ability pioneered in Apex Legends and finding its way into similar games. CS:GO now features a chat wheel, which makes team communication faster and easier in the game. These improvements are proving to be a massive benefit as the 8-year-old game maintains a massive audience of gamers, streamers, and fans.

CS:GO has over 2.7 million followers on Steam and though the game has faced some backlash over a few recent changes, the team-based shooter doesn’t seem to be slowing down.

Holding onto the number one spot on our Game Industry Titans is Grand Theft Auto V performed extremely well in the social media columns of our matrix. An eye popping 38,200,000 combined social media followers placed GTA V second only to Fortnite in that category. Rockstar North knows how to keep players talking as they keep pumping out updates to the online portion of the game, including the new island of the recent Cayo Perico Heist update. The developers continue to add new vehicles, weapons, music and even real-life DJs into the game, making it a massive, growing open world playground that players keep coming back to.

As mentioned in last month's Game Industry Titans article, GTA V did not come in first place in any of our categories, but it did score high enough in all of them to make it our top pick. It also scored a top performance of 2nd place in three categories including Average Daily Twitch Viewers. Over 200,000 daily Twitch viewers tune in to watch streamers play GTA V.

GTA V, along with the other games in our list, are constantly facing new contenders such as last month's surprise entry at number 4, RUST. Other Titans like Call of Duty: Modern Warfare Warzone are just outside the top five waiting to pounce. Perhaps a new update, or influencer could change the course of next month's top five Game Industry Titans. Tune in next month as we continue to research the leading heavy hitters of the PC gaming industry.