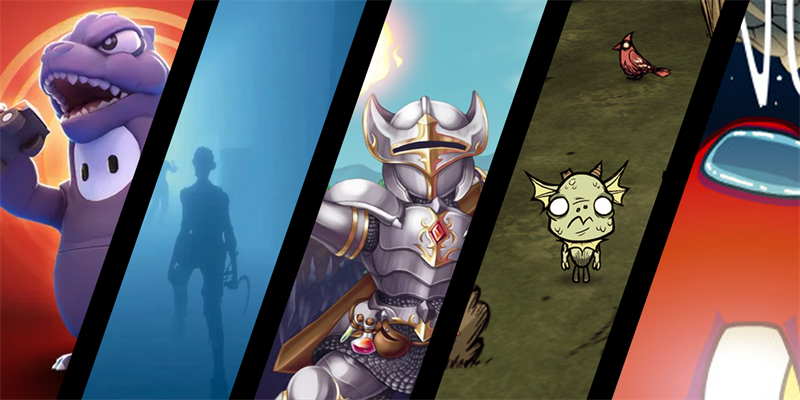 This month we’re diving into the analytics of our Top 5 Intriguing Indies as we look at what’s being played, what’s being watched, and who’s getting followed. Gamers are connected with their favorite games in a variety of ways. We take information like social media followers, YouTube trailer views, Steam stats, and Twitch viewers and convert those numbers into point values. The top five point leaders include a few new breakouts and some old favorites. And now, the top five Intriguing Indies!

Dropping down three spots from 2nd place in our list last month is the sequel to Klei’s Entertainment 2014 hit Don't Starve. As you might have guessed, Don’t Starve Together brings all the survival elements of the first game but this time allows you to team up with friends in order to combine class specialties to increase your survivability.

Don’t Starve Together feasted in our two Steam Categories with 480,797 Steam Followers and over 31,000 Average Steam Daily Peak Players, placing 3rd overall in both of those categories. It also placed 4th in the Twitch Peak category topping out with 93,844 viewers peak for the month of February. Lastly, Don’t Starve Together did well in the Combined Social Media metric keeping it in the top 5 for this month.

Phasmophobia dropped one spot in our list this month but it continued to be a frighteningly fun game to watch as evident in our Average Daily Twitch Viewers and Twitch Peak categories scaring up 127,078 viewers in the latter column. Phasmophobia also did well in our Average Steam Daily Peak stat ranking 2nd of all the games we sampled. A strong performance in the other categories meant Phasmophobia continues to haunt our top 5 Intriguing Indies List.
Kinetic Games is the indie game company behind the creation of Phasmophobia, which is a hunting and psychological horror game. Join up to three friends for co-op for team play or enhance your experience with cross play VR support. Players can take on the role of team lead by calling the shots from the safety of the support van if they are too scared to venture inside and hunt for ghosts. Gather photographic evidence or cleanse a room as you hunt for Shades, Demons, Banshees, and many other types of ghosts.

Since the dawn of cartoons, watching characters fall elicits laughter and Fall Guys capitalizes on that core human reaction. Even more hilarious are the Minions style animated video game characters falling in pink slime, bumping into each other, or being taken out by the levels themselves. Up to 60 of these player guided characters will compete in matches as they attempt to qualify for the next round in a series of hilarious and challenging mini-games on a three-dimensional playfield.

The all-new Season Four update has brought seven new levels and the Squad Mode feature. Squad Mode allows you to work as a team to gain those coveted crown shards (which lead to crowns). The crowns can be traded in for the in-game currency called “Kudos” which can then be exchanged for custom emotes and outfits. We’ll be keeping an eye on Fall Guys and perhaps it can bump its way to our number 1 spot!

Terraria is another new addition to our top 5 Intriguing Indies, not because it suddenly started performing well, but because we added it to the mix after seeing some of the numbers that this decade old game is bringing. Terraria certainly did surprise us, shooting all the way to number 2 in our list with huge numbers across the board. In the categories of Steam Followers, Steam Average Daily Peak Players, and Twitch Peak viewers Terraria was second only to our number 1 game in our Intriguing Indies list. It also did well in the Combined Social Media column with close to 800,000 followers.

For those that may not be familiar, Terraria is a 2D action-adventure sandbox game with a procedurally generated world. The sprite style graphics are a throwback to early console systems giving the game a uniquely vintage look. Players gather resources and craft new items as they encounter enemies and NPCs who can inhabit structures the player builds. In May of last year, the fourth and final update “Journey’s End” was released. Even though the game is on the older side, recent content has kept the player base strong. Terraria has sold over 35 million copies and continues to be a force in the world of indie gaming.

Among Us once again takes the top spot for Intriguing Indies as people continue to stream, follow, and play this hit sleuthing game. With the highly anticipated “Airship Map” update on March 31st, Among Us shows no signs of slowing down. From developer Innersloth’s Twitter feed we deduced that there will also be additional content included with the new map in the form of “a few free hats.” Fans of the game will only bolster the already red-hot stats making Among Us a contender for number one on our list for the future as well.

We’ve previously covered the stats in January’s Intriguing Indies list, suffice to say that they have only become improved upon. Notably, the combined social media number continues to rise with over 2.3 million followers. Speaking of popularity, Among Us is arguably the most popular “Social Deduction” game to date. Social deduction games use a vote style system to move gameplay forward.