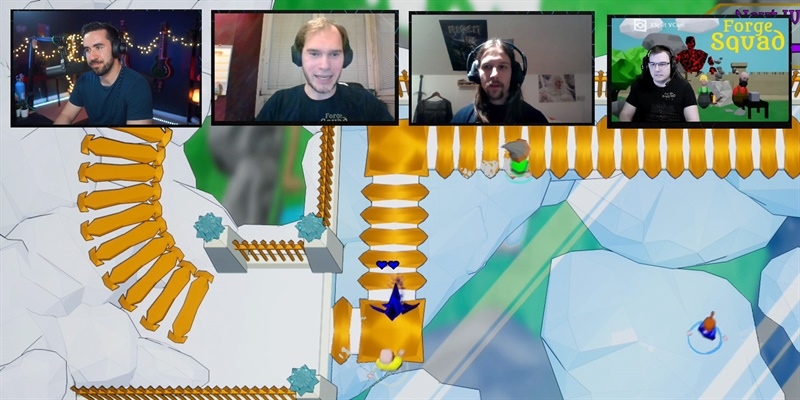 Join us for a special edition of the Lenovo Legion live stream on Twitch where we chat to the developers of the new indie strategy game, Forge Squad, and partake in some live gameplay!

Forge Squad is the debut work of Wizard Dudes, a small Austrian indie studio consisting of four developers. The game was started as a student project and developed further after graduation. In this stream, we chat with the team about their approach to game development, the challenges they faced producing Forge Squad, and what’s next.

Forge Squad is a cooperative crafting game for up to 4 players.  In order to defeat the approaching waves of enemies, runes must be forged. The crafting consists of several steps, which can only be efficiently done together. Enemies can only be injured by towers charged with the right type of runes. But be careful, because the enemy also knows how to defend itself and advances with armored units, whose shield must be destroyed by the player himself.

Cooperative action
Face the challenges together with up to four players (local multiplayer or Remote Play Together). Good team play and coordination is crucial.

Varied environments
Play in a medieval castle, in ancient Egypt or high up on an icy mountain. A whole 5 different environments provide variety.

Customization
Choose one of four characters and customize the appearance.

Steam Remote Play Together
The game has been specially tested with Steam's "Play Remote Together" feature. Launch the game, invite your Steam friends, and start playing.

Story
The mighty god of the underworld has sent his henchmen to conquer the kingdom of heaven. To prevent this, the gods created an intermediate world and created humankind. In gratitude, the humans built towers to protect the entrances to the Celestial Kingdom. Powerful rune magic is needed for the towers to drive away evil. It is now the task of the blacksmiths to stop the threat.

Ready to get started on the Forge Squad quest?  Check out the video now and then click here to play on Steam right now!

Learn more about Forge Squad at the links below:

Already played Forge Squad? Let us know what you think and tell us which indie game developers we should interview next in the comments!

For more interviews, live gameplay streams, eSports showcases, and much more, click here to subscribe to the Legion channel on Twitch today.